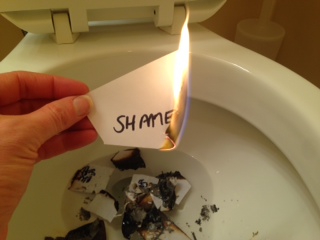 A year without shame

“If we are going to find our way out of shame and back to each other, vulnerability is the path and courage is the light. To set down those lists of ‘what we’re supposed to be’ is brave. To love ourselves and support each other in the process of becoming real is perhaps the greatest single act of daring greatly.”
― Brené Brown

Happy New Year! How did you ring in the new year? Did you spend some time reflecting on 2014 and dreaming about 2015? Or did you let 2014 slllliiiiide right into 2015? Totally ok if you did! I decided it was time for some soul-searchin’, so I signed up for Stratejoy’s Holiday Council in December and went deep into reflection mode with a couple hundred big-dreamin’ gals around the globe.  Led by super-coach Molly Mahar, we reviewed, released, dreamed, schemed, plotted, and planned as we closed 2014 and began 2015.  I absolutely loved this conscious way of reflecting on the past year and then planning for the new year, so I thought I’d share my new year-changing rituals and what surfaced during this journey.

On New Year’s Eve, I locked myself in our bathroom to perform a year-end releasing ceremony.  Noooooo, not that sort of release, but an emotional release of what I want to leave behind in 2014.  As part of my Holiday Council reflections, I made a list of what I want to keep versus what I want to release from 2014.  The keepers—like intuition, God, writing, and vision–are colorfully captured on little strips of paper and tucked away in a decorative chest of drawers as positive reinforcement for years to come, whereas the emotional “poo” was ceremoniously burned and flushed away.  Shame, guilt, fear, anger, regret, grief, negative self-talk, limiting beliefs, the past, and a few other doozies… I burned every single one of those mo-fo’s and then flushed the whole pile of emotional crap down the toilet.  As skeptical as I was about this year-end releasing ritual, I actually felt freer after the flame-n-flush, like a minuscule mental shit—I mean SHIFT—took place.  Did I expect to wake up on January 1 feeling like a whole new person? Not really, but I felt good about taking a symbolic step towards the joyful and carefree life I so desire.

With 2014’s negativity behind me, I then spent a few hours on New Year’s Day finalizing my 2015 vision board, with the theme of “Joie de Vivre.”  I came upon this lovely French expression when I was searching for a word which embodies feeling joyful, carefree, and creative.  I love how it is defined on Wikipedia as “cheerful enjoyment of life,” and, even more fitting, “an exultation of spirit.”  Yep, that’s what I want— an exultation of spirit! C’est bon, non? I’ll take THAT with a glass of champagne please!  The end result was a beautiful, inspiring board full of images and quotes which reflect joy, authenticity, creativity, freedom, and God-consciousness.   I went to bed feeling optimistic and accomplished– maybe, just maybe, 2015 would be the year of free-flowing joy. YEEEEESSSS!!!!!!!

Fast forward several days, and I am here to tell you that absolutely NOTHING has changed.  The same ol’ pesky demons– the ones I flamed-n-flushed–still haunt me throughout the day, leaving little room for the unbridled joy depicted on my vision board.  Hmm…what to do?  Now, I know JOY- we go waaaaay back.  I can relive many joyful memories and tap into that emotion easily.  I just think about my little Toots and the joy juice starts a-flowin’.  So, this isn’t about my ability to experience joy, or that I need to give myself permission to live joyfully.

I want a year without shame.

…because a little voice tells me that, without shame, I will have a LOT more room for JOY.  She’ll be able to show up freely and abundantly…. joy at a cellular level, joy flowing through my veins, joy flowing into the world around me.  Picture me as a platinum member of the Joie de Vivre Club, shakin’ my bootie, tossing my long hair around like a boss, laughing uncontrollably, and bear-hugging everyone in my path.  A conduit of joy! A true “exultation of spirit!”  YEEEHAAAW!!!!!

So, as I’ve stumbled through the first days of 2015, attempting this joyful dance with my feet still shackled by shame, I only found my footing when I stopped to pray. Down on the floor, hands and knees, sobbing, waving my white flag of surrender… asking God to release me from this shame which consumes me, open my heart to His Grace,  fill me with His Joy, and make me an instrument of His Peace (yep, just like the Prayer of St Francis!).  Adding to my anti-shame arsenal of releasing rituals, zany visualizations, and affirmations, I now have my daily prayer for 2015…a year without shame, a year of drawing closer to God, a year with plenty of space for joy, authenticity, freedom and creativity.

The final step in releasing my shame is writing and talking about it. No more secrets, no more hiding.  What about you?  What are you ashamed of and what steps would you like to take to release yourself from shame?  Let me know… I’m curious. I’m here. Open arms, bear-hug, no judgment.